getting out of my head

i've been taking a breather.  or, rather, trying to breathe.  as i've mentioned, it's a rough time in my head usually starting in september, so i'm in the process of going thru the motions of living.  i don't do prescription meds.  i've gone that route and they don't help me and the side effects i have make matters worse.  believe me, i wish they worked, i'd love to not feel this.  i should have a therapist, but... don't.  i've gone that route, too, and while it's nice to have someone to bounce ideas off of and have an outsiders opinion about how i self sabotage and how i can come up with better solutions, it gets costly, it gets repetitive, and i don't wanna.

during my little break from this 'daily' blog challenge, i have been taking walks with the pup, netflix binging, and varnishing a few paintings for my show, which really needed to be a priority.  i'm just about done with varnishing my completed paintings, and then priority will be on wiring them for hanging.  i think i will try to tie mark up with that task on sunday if he will sit still long enough for that.

i've been feeling like such a drain on him these last few weeks.  very needy and want-y and if i told him all the things my brain thinks and feels i fear he would go running far, far away.  he knows most of it, as i'm pretty open with my fears.  they've taken over my dreams and created a monster at times.

part of this is left overs from my previous relationship, where he would go off and do 'his thing' while i was home with the kids, barefoot and pregnant.  i have abandonment issues, serious ones.  but, i don't want to be that person anymore.  i want my man to be happy!  he works so hard and deserves his down time.

anyway, i finally got a glimpse of interest in creating when my latest class in lets face it with kara bullock came into my inbox.  this class got my muse excited again, and i went to my trusty unsplash account to find inspiration for a new painting.  i found a photo of a girl that spoke to me and that has hands and glasses like in karas class.  i had ideas for it, and incorporated other elements for some healing to come thru the painting.

the painting is to be called "focus on the light" and will have elements of light and a bird with emotional healing as its spiritual meaning. 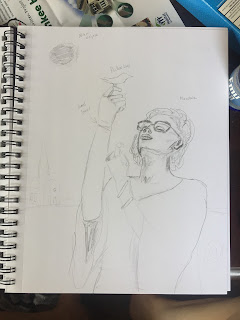 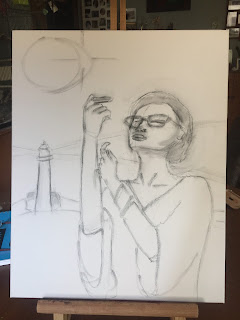 preliminary sketch on the canvas

i'll be working on this in the next few days as i follow my muse, body and mind.  i'm glad for these classes, as usually if i'm in a dark frame of mind but the body is feeling ok, i can just watch a video and the muse will get the itch to slap some paint around.  i can watch for 10 minutes and then go into the studio and play.  unless i'm painting something very detailed that needs a brain, i can change my mood for a while.  beginning paintings is always fun.  backgrounds are great.

this painting is rare for me in that i have most of it already thought of before putting paint on canvas.  usually they evolve while painting.  guess i needed the symbolism of light at this moment.