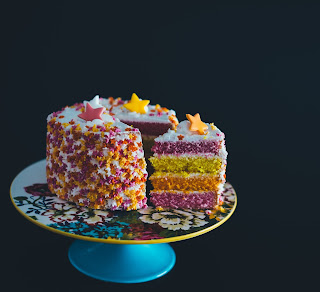 Photo by Annie Spratt on Unsplash


those are difficult words for me, and i'm not sure why.

i'm kind of conflicted about the whole thing, really.

part of me wants a big bash.  but what would i want a party to be like?  wine-or-other-booze?  somewhere besides my house, for sure.

i want to feel like people care about me enough to celebrate me.  but then, i want to hide from it all and everyone.  because i am not comfortable around people.   because i feel nobody would come anyway.  because most of the people who are in "my tribe" live far away.  because i'm sad i'm turning 50.  because i don't wanna be 'old'.

i think back on my daddys' 50th birthday celebration.  he had a tent and a million people (ok, not that many, but a lot) at the farm to celebrate his milestone.  there was tons of food, people brought their instruments to sing, there were toasts made.  but, he was the man.  he was popular and amazing, and so loved in his career.  i stay at home, have never had a job, and stick to myself.  there can be no comparing.  but, why does part of me want a birthday bash when it would stress me out?  do i need the validation that i am worthy of a party, that i made it this far?  do i feel that this is what people do for their 50th, what people do FOR people when they turn 50, and that i'm not loved enough if i'm not given a party?  those expectations are killer, guys, killer!

my mother tells me she took a trip to ireland for her 50th.  at least i think that was the ireland trip.  my momma has always loved traveling and was able to do so.  mark and i don't have the funds to do anything like that, and even if we did, i'd be worried about my pup at home.  and, no, we can't even take her camping because she hates the car!  so, travel is out.

i told mark a bit ago, like 6 months or longer, that this was his to plan for me, thinking it really wasn't right for me to plan my own party.  gave him some ideas, like going to see a live musical.  we tossed around the idea of going to new york city for a big night on the town.  or boston, which is several hours closer to us and could be done in a day, not overnight like NYC.  i basically set myself up for disappointment.  and i haven't bugged him about it for months.  because i'm still unsure that i want anything.  maybe if i just ignore it, i will be ok. (update; we have discussed, and bought tickets to see "evil dead the musical" in worcester, which is even closer to us than boston, a couple days after my actual birthday!)

so, what is it about 50?  mid-life, assuming one lives to be 100 years old.  lord help mark if i do!  has the crisis hit?  i think it hit me a while ago, always thinking of the next big number.  but 50 is B-I-G!  where one looks back on where they were, and looks forward to where they wish to be, and then tries to map out directions from point A to point B.

i know i've come a long way in my life, from that scared little teenage mom struggling to keep her marriage going.  who was told not to come back with a baby if i got married and it didn't work out.  so, i stayed in the marriage for as long as i could, against the advice of my close friend who saw what was really going on.  i've come SO far from that place!

even from the newly bereaved mom place of being couch bound and over sleeping for more than a year.  though i still was strong and brave there, taking on school councillors who didn't understand, two bouts of lice, driving hubby to work, and dealing with police and obtaining a no trespass order against a dude at the cemetery.  i'm not there anymore.  i've come so far, and done such hard work.

i'm now in a good place.  one of creating art and grocery dates with hubby.  life has become placid for me, as placid as i can get anyway.  taking daily walks with pup is an exciting event.

but, where do i want to be in 5 years?  what do i honestly want?  i'm scared to ask for a budding career that will make us money.  scared because of the eyes on me, the travel involved in showing, the stress of commissions and selling.  if i could do anything and not fail... thats exactly what i would do!  if i had no anxiety disorder, sign me up yesterday!

so, how do i get to THAT place with generalized anxiety disorder???  the art show i'm doing in february is a huge step in the right direction.   when mark and i were at the fairgrounds i went to look at the art that was showing, and it interested me and i thought for a second that i could handle that.  i have a friend with a storefront who has suggested i set up to sell my art in her shop, and i have plans to make smaller, affordably priced work for there (after february).  maybe buying some of my art merchandise from my shop along with smaller original work to set up at street fairs and farmers markets in the towns closest to us.  those are some mostly manageable ideas that could help me get to where i would like to end up. 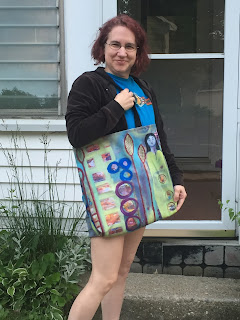 one of my totes, still going strong

i'm still in that wishy-washy place of turning 50, but i think i'm feeling better about my role in the next phase.  while i am still being gentle with my self care for my all over health, i do have these mini quests to check off, so to speak.

still the warrior of my life!