day 7- a revelation of sorts

i think i've figured out why september of these last few years have been increasingly difficult for me. september had always been one of change, which has always difficult for me, but it was also an exciting time filled with back to school activities. shopping for new clothes and school supplies, first with me as the recipient and then with our 6 children. it was a time of busyness and of anticipation of the coming years' growth and learning.

after winter died, the children living with me (my two living boys and my oldest stepson) were all taken out of school to learn at home for various reasons. they were all struggling with a school system that allowed no grief time, that didn't understand anything but teaching cookie cutter style. the kids each had their own unique way of dealing with their trauma and it came out in their schooling, of course.

the boys and i became even closer, doing everything together, me trying to figure out how to help each of them and eventually finding a great resource nearby that allowed for child led learning. the center was short lived, but the kids got a lot out of learning how to learn during that time.

my stepson eventually went back to public high school to succeed a bit better than if he had stayed in the system. he had been given some new tools and had been gently guided by his family to a level of maturity where he was now able to fit in. the other two boys got their GED each at age 16 and started taking college classes.

now these kids are each successful adults, one living in california with his wife and 10 year old twins (he would have to live in hawaii to be further away and still live in the united states!).

where my house used to be a bustling beehive any day of the year it is now silent. september just brings the silence more fully into view. my children were my career and i was forced into retirement. 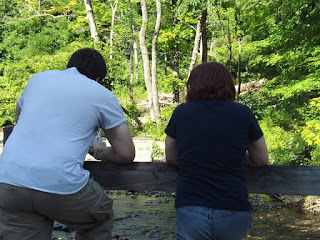 youngest and i at the bridge by my childhood farm

it's nice to have the understanding of where all this extra sadness is coming from in september. knowing is half the battle and hopefully i can now concentrate on finding something to help the empty nest syndrome that becomes an unbearable beast.


in other news, my computer is failing. luckily hubby is a computer technician who can revive it so i can work on it for a few hours the next day, but theres no telling how long it will be able to continue in this fashion. my art, my blog, my classes- all need my computer. sweetie estimated for me to get another computer of this quality would be 2-3K. we just can't afford that, with my car needing transmission work, and our house leaking during rainstorms.  i just don't know my future in blogging right now. i'm worried i won't be able to download the rest of this years classes. i'm a smidge less concerned about getting reference photos to work from, but that concern is there, too. so, if suddenly the blog becomes stagnant, thats probably the reason. hubby now and again gets old computers at work that he can frankenstein together, but that happens less often than it used to. i'll do what i can to continue my time on social media as long as i can, cause blogging has become important to me


my bff is going thru some rough stuff that is just not letting up. she is feeling lost and alone and i'm sure is feeling beat up from life. it's been going on a long time for her, and she got some devastating news a couple days ago that brought her again to her knees. my heart is with her, i hurt for her. and i wish her peace in these troubled times. yesterday i went into the studio and found a blank canvas to use as therapy for my own feelings about what she's going thru. 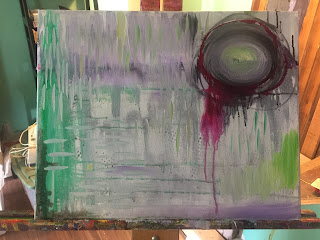 it will be getting more layers before i call it complete, but i'm liking where it's headed and i'm grateful for the outlet that art provides me when i'm feeling useless.