the end is near!

i can see the finish line to this painting, and it's coming in exciting ways.  today i was inspired to cover a lot of the background with a transparent yellow.  that was scary, but i knew if i didn't like the result i could spray it with water and wipe it away.

i also worked her hair again, making this girl one of the most changed paintings, hair-wise, as i am!

here she was yesterday... 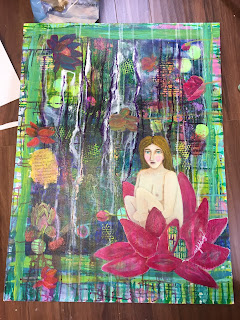 and after some good changes... 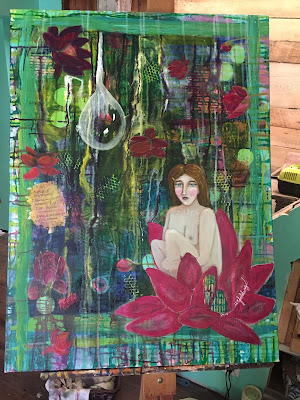 i have included a large drop at the top, symbolizing many things in my life.   i knew this symbol would be included somewhere in this painting, but had no clue it would be so prominent.  i like how it helps move the eye around the canvas.

i can see where i will work tomorrow, a small change, and i will soon bring her upstairs to sit with me a while.  she may give me more whispers, or she may silently speak of her completion.

i'm so happy with her!  hopefully i can get a bright, calm day to get good photos of her to put her in the shop in the near future. 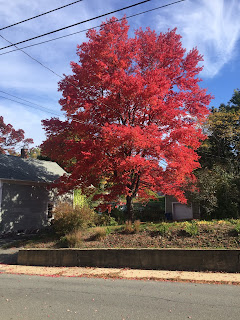 we've had a few days of indian summer and a few biting chills that foretell the coming bitter months.  but it is here, and with it comes a slowing of my creative blood.

i ask to play with my muse daily, i wish to dabble and throw glitter in the air so to speak.  and i'm so close to finishing my latest painting i can taste it.  but my muse apparently has attention deficit disorder and doesn't want to linger in the details of finish work.  she wants to splash and drip again.  we have too many unfinished paintings to complete, can't we just finish this one?  just the one, and then we can go play with a new canvas as a reward...

so, today i begged again, and she said if i make it another challenge to the end of the month she may play a bit more with this canvas.  i won't bore you daily with this small challenge, because the tiny differences won't be apparent to anyone but myself.

except today.  i'm gonna bore you with the minute details today.

here she was last time i blogged about her; 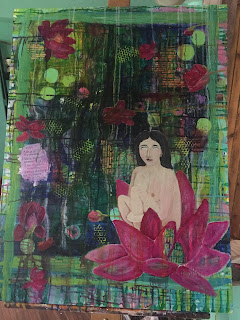 i have dabbled here and there on the girl and the focal flower without blogging for the same reason. small changes are boring.  i'm trying to get more depth to the girls features and make the lily sparkle a bit more.  i've changed her hair and eye color a couple of times and have been working on both again today.  the eyes still need more for me to be happy with them. 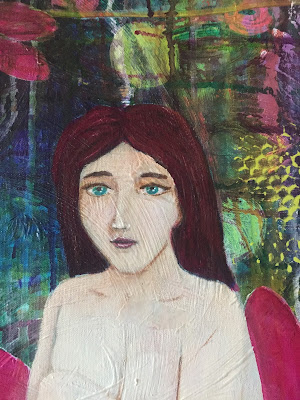 i think i'm finally happy with the depth of her hair color.  several layers of several colors and a glaze over it all. 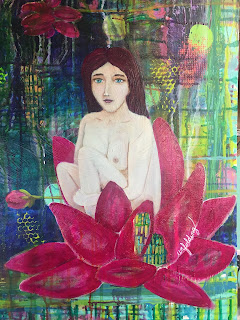 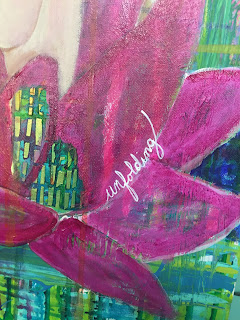 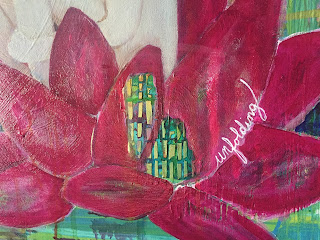 a few days ago i added an iridescent pearl over each petal to see if i liked the sparkle.  i did, but it wasn't what i had expected of the color, so i added a glaze of the quinacridone magenta i used to begin with, and that did the trick.  this lily is a beautiful rich sparkling color that i am thrilled with!


i know that getting to the finish line with this painting is going to take some work.  i'm not only battling my own 'junk' getting to the studio, i have my almost 16 year old pup, pita, who must be by my side but hates being in the studio for some reason.  when i bring him down, he runs around, trying to get my attention, tap dancing like he has to go outside.  we have done this routine so many times.  he goes crazy, i bring him upstairs in order to go thru the house to the dog area outside, only to have him run to the living room instead.  as soon as i let my guard down and ignore his tap dancing, he will go pee on my studio floor.  i am always on edge with him, and he refuses to settle down.  if i leave him in the living area of the house he will run around barking and i worry about his heart issues.  it's just a frustrating situation right now with him in his old age.

i have been very busy while the pups and i form a cuddle-puddle on the couch.  it's getting close to the end of the year for my yearlong Life Book workshop, and i need to make sure all video content and pdf's are downloaded before the beginning of next years workshop! 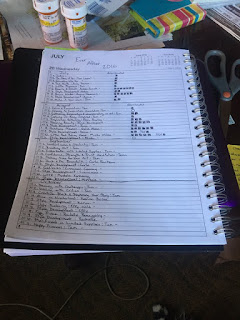 i have a couple of other art workshops i'm taking, and each class has it's own download page to make sure i'm up to date.  it's good to be organized, and it's something i can do while pita stays happily by my side on the couch.

new products in the shop!

we finally stopped life long enough to catch up on the photos from my september challenge and put them in my store!

there are five challenge prints total so far, with a few more still in the camera.  and, of course, when i'm finished with the canvas that will be going up as well.

back to the goodies; 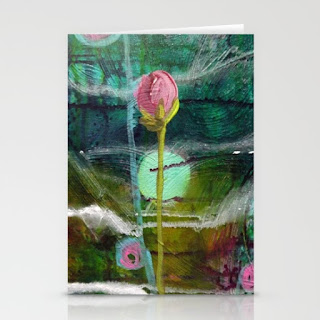 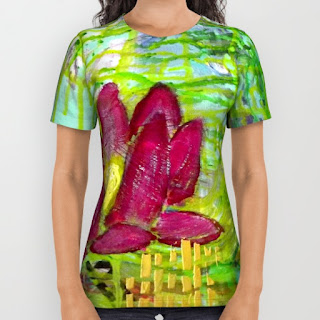 "challenge 3" gets cropped as a colorful shirt 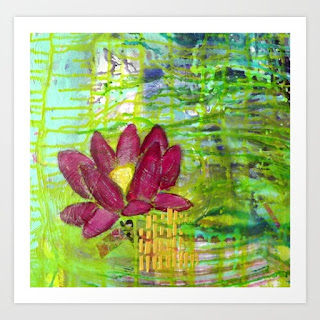 heres the print of "challenge 3" 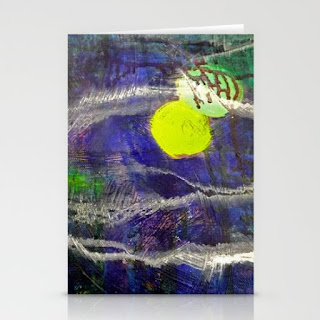 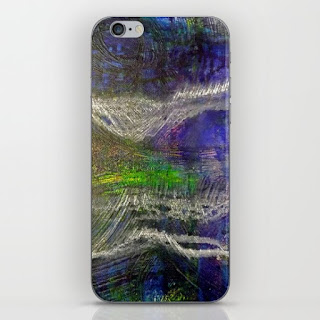 some items we liked the crop without the 'moons' 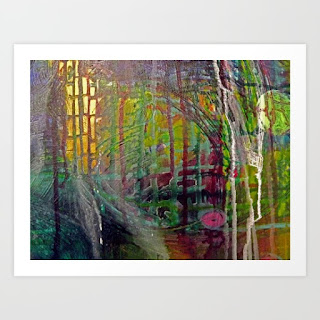 and a favorite crop, "challenge 5", as a print 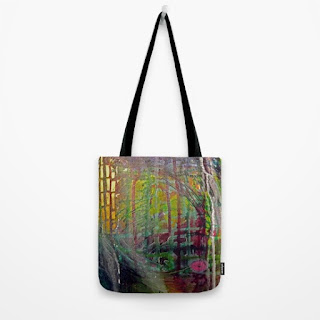 we must have uploaded these to society6 at *just* the right time on *just* the right day with the stars in alignment *just* the right way, because people were promoting a few of them like hotcakes.  when you get enough promoters quickly enough, you get your work in the actual society6 shop, where there is a better chance for others to see your work.  i got word last night that two of these, challenge 4 and challenge 5, were selected to be included in this elusive shop!  i was dancing in my seat, let me tell you!!!

i celebrated my birthday the other day.  normally my birthday is no big deal, but this year i had some money to spend, and it seems that friends were also happy to help me celebrate, so it was a blissful few days feeling high on the love and the retail therapy.

one of my biggest wishes was to be able to get some quality paints.  i've been able to get golden acrylic paints in small quantities, but this week i was able to make a large order and it came in right before my birthday 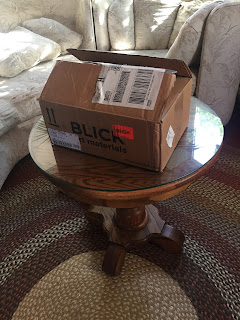 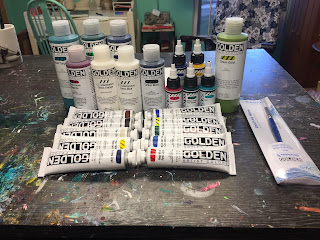 a drool-worthy supply of golden acrylics 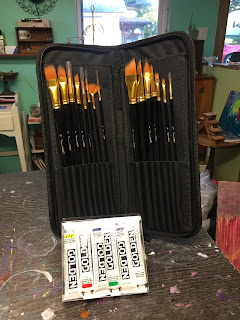 friends gifted me some wonderful artist supplies!
more golden paints in colors i didn't yet have, and an amazing set of brushes!

i also had many well wishes on Facebook that kept me smiling thru the day, and my mother and aunt came to bring me out to lunch.  yummmm!  sweetie came home with some canvasses and a sketchbook for me.

the next day my adorable hubby took off work in order for us to look at a car!  i had my eye on this car for a while but never thought i'd be able to afford one.  i had found a few in my price range with the options i wanted, but they were pretty far away.  heated seats are a must for me in the cold new england winters and with my pain issues.  i also wanted a sunroof and back-up camera.    i was going to be picky and not feel any guilt about it!

it took all day, and with a little bit of drama, but i was able to bring my baby home! 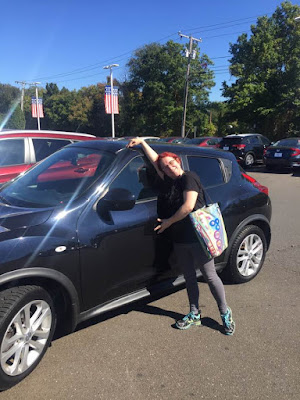 she is a 2011 nissan juke SL, with all wheel drive which should be great in the snow.  and she's all mine!!!

"i will hug her and squeeze her and call her pearl"

all in all, i think 49 may be a good one, if the last few days are any indication.

i'm battling my demons and it is hard work. it's frightening, knowing that the fog of seasonal depression is wafting your way. i have things i'm looking forward to in the near future, things to keep me busy as long as the motivation is near. it's just difficult to stay positive and keep the movement going when you are standing in quicksand. mark is a most wonderful husband.  i know he does all he can to keep my head above the ooze, and he will be the first to say "welcome back" when the leaves start to bud in the spring.

in the meantime, i know that i'm unfolding 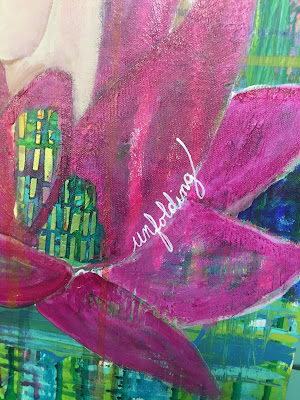 today i plan on doing more work to my canvas.  it feels good knowing that this beautiful piece is waiting for me.  this is something that i created.  i had no help at all- except from my muse and she rocks!    knowing this came from my hand blows my mind.