a while ago i posted about getting my first commission, but i don't recall if i posted about the second one that came in at the same time.  if not, here is the news again.

this is to be for a young family with a soon to be baby boy.  i have known cassie, the mommy to be, for her whole life.  literally.  cassies mom, nancy, and i were room mates in the hospital after having our babies!    nancy and i have been best friends since that day, the connection was so strong.  cassie is like a daughter and friend all wrapped up into one for me, and now i was being commissioned to paint something for her new baby boy.  talk about honored!

the new nursery is a 'jungle theme' with monkeys, trees, and a giraffe mural painted on the walls, and they thought maybe a lion or zebra would go well.  i had an idea for a painting i had wanted to try, a pose that one of our childhood ponys had in a photo, so i asked cassie if that would work and she agreed.


* unfortunately i think i trashed my scanned photo of the pony while cleaning out my completed paintings reference photos.  and i'll never find it in my non-organized photos.  so...  imagine a very closely cropped photo of a shaggy little pony sticking it's nose close to the camera and you get the idea.  basically just a photo of his face very close, with little body showing.


i went to work sketching and planning and painting and painting over, and re-sketching, and head-scratching.  i was going on multiple reference photos- my photo of the pony and several zebra photos- as i couldn't find one that had one looking the way i wanted it to look. 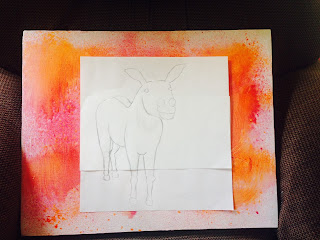 i wanted the zebra to be more prominent on the canvas,
but making the proportions right was tricky 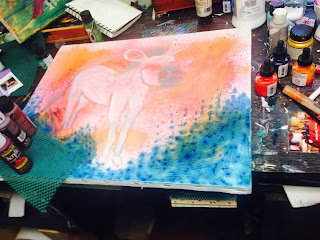 getting more color and texture on the canvas around the zebra 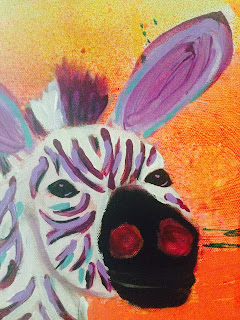 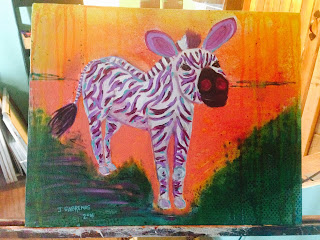 but the body was too long

so, i scrapped this canvas, as the background is india inks and painting over the zebra would be too noticeable.  on to zebra 2.0... 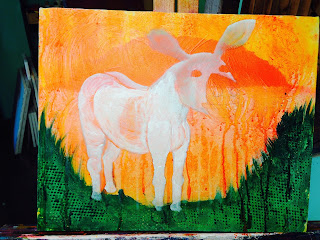 because i had to ruthlessly delete from both my phone and my computer to gain space, you just get the finished painting instead of progress and close-ups of his wonderful brown eyes and texture photos that i like to add...  cause, it's me, and i like close-ups of texture. 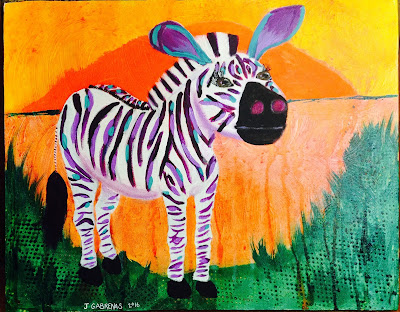 i hope Cassie, Jon, and soon-to-be born Blake have many years of enjoyment playing while zebra watches from the wall.

healing hands to a new home!

my first commission made it's journey to it's new home today!

this was to be a birthday surprise for a young man who does healing work and wishes to do more in this field of work.  i had a sketch i had done earlier and my client agreed that it would be a good basis for the painting for him. 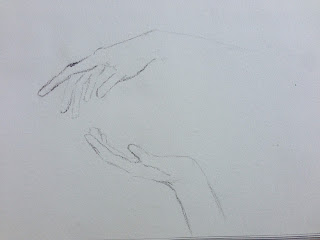 i had an idea for the energies and wanted the background to be fluid like the energy was to be, so i started with my india inks in greens and blues. 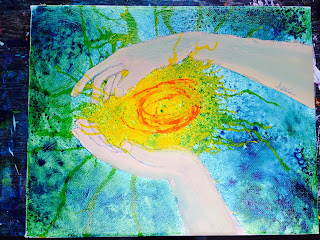 the only progress photo

i blew some inks in the energy colors around the canvas where i wanted the energy to be, then got the hands down in acrylics, and added more inks on top so the energy would be going around the hands.  i also scratched the word 'heal' into the acrylic on the top arm, and i am happy with the result.

i struggled with the skin tones for a bit, but i am so pleased that i was able to get the result i was after.  and lastly i was concerned when i looked at the painting from across the room that it looked like it all blended into one shape, so i outlined the hands with charcoal and that brought it out the way i had hoped it would. 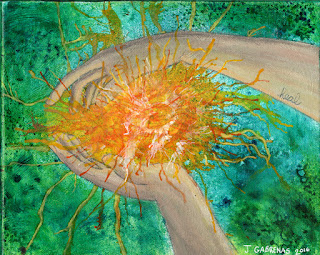 prints are up in the shop

i'm so pleased that the birthday boy is happy with the result, and i wish him success in his journey.  i hope the painting blesses him in his path.

a sort of challenge

i'm going to attempt another challenge, but i'm not going to pressure myself with it.  i've been struggling with the intense weather changes lately and know that health, or lack of health, plays a big role in what gets done or left unattended.

mark and i were lucky enough to find a ginormous canvas a couple of weeks ago.  maybe last week.  whatever.  this thing is HUGE! 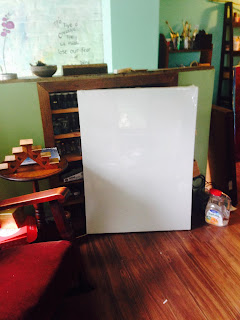 i don't have any plans for it, so i was thinking i could give myself a challenge to work on it, even a little bit, each day for the month of september.  even if it's a mark or two, just do something to it.  create layer upon layer to this monster canvas and see what happens.

i've made myself a list of materials and techniques i don't want to forget about while creating.  and i'm thinking about the colors i'd like to see together.  this one is going to be about experimentation.  it will change from day to day, so i know not to get too precious about the previous days work.  i will be taking photos daily, but i won't be posting daily.  probably not until the end of the month.  and at the end of the month i will probably live with it until it tells me what the end result wants to become unless it comes to me beforehand.

i now have two easels to work from, thanks to a special friend of mine who found a beautiful specimen and thought it would love to live with me!  i'm glad for the timing, and am so grateful for her thoughtfulness.  it's the perfect size and fits nicely in the corner by my paints. 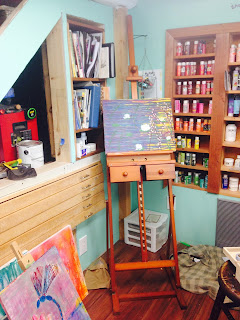 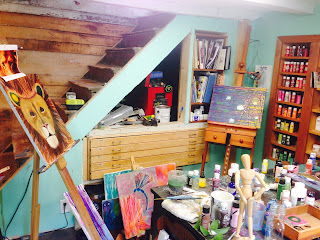 now i can have dueling canvasses!


while i wait for september to come, i will be cleaning the studio to make room for this monster canvas to take shape.  i know some of my work will be with it on the floor, spattering paint around, and, well, it's just nice to start fresh.

you can see i still have the lion painting in progress.  i'm still thinking about how to create the candle light in his fur.  i've been ill, but the brain has been actively working it out.

i've had a bit of a stall with creativity lately, unfortunately.  it's very frustrating to go thru when you want to succeed at something but these ebb and flow cycles seem to run the show.  dealing with a bit more pain the last week or so and just been in recovery mode, doing the barest minimum... breathing, eating, taking care of the critters.

i started a bullet journal  in late july to help get me more organized and i had hoped to do a 31 day challenge this month, already feeling like a failure knowing some boxes would not be checked already. 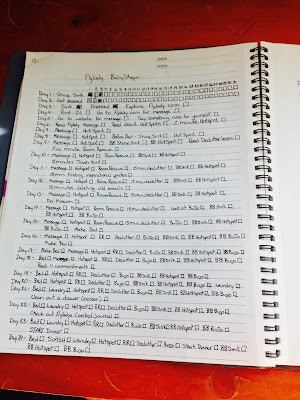 each day we add one thing to do,
so days 1 and 2 just have boxes for the 31 days

but, IT'S OK!  this is not going for perfection.  life is about trying, doing your best with what you have at the moment.  whatever you are doing is the best you can do, no matter what joe shmo thinks.

In my daily spreads I track my water intake –three sobe 0’s a day is goal- how I slept via my fitbit, my pain level and symptoms as well as what I hope to do that day and notes about what made me happy or other important events. i'm starting this in an old notebook, so it's rather fluid as I find what spreads I need before getting a journal dedicated for this system.

i'm getting the calling to work on a lion painting i started a little while ago after a vision I had of a lion with a crown of candles on his head. 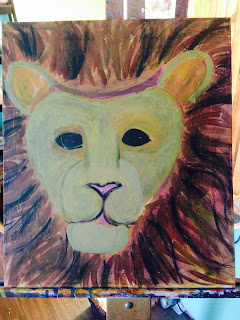 I’ve been getting lots of lion messages, and know this is the time to complete him, or at least work with his energy.  as I researched lions to get reference photos of the face, I came across info about the lions gate portal, which is not something I was aware of.  I find this part interesting;

“take what is of low frequency and you will transform it and turn it into Golden Light!  Even though you may be surrounded by people who are filled with fear and anger and other low frequency emotions and who are making choices based on these emotions, you will make your choices from Love and Compassion and you will be the Diamond Light that shines clearly and magnificently. “

i love that my lion vision has him with the light of candles onto of his head.  i am going to run with the lions gate portal in this painting.  i feel it's important. 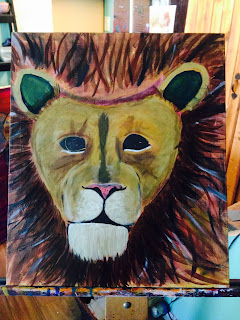 i need to figure out how to paint the candle glow on his fur, and am nervous so am stalling a little bit with that detail.  but, it must get done, even if it's not 'perfect' in my artist head.