not too many know this about me

this is todays prompt and i had to share this one.

i don't know why or how it started.  but, with six kids between us i had to make life a little more, um... light-hearted.

and, for years and years this went on.

hasn't happened in a while, since the kids moved out i suppose...

but, it never failed.

whenever someone asked for a pickle, or mentioned the word

i would start singing the pickle song  (aka the motorcycle song) by arlo guthrie.

cause to REALLY sing the pickle song, you must sing it badly.

i brought my nephew into the tradition, as he was a regular at the house at that time, and i swear he didn't think i could carry a tune.

he may have been surprised to hear a few years later that i had joined a singing group (short lived, but fun and scary).  i remember him talking to hubby about my singing, and hubby trying to explain that i can sing, it's just that song is traditionally sung that way.

about a month ago, my sweet man texted me saying that he was at lunch with a client, who asked mark if mark wanted a pickle and then launched into the song.  mark said he HAD to tell me immediately.  i had to ask if he sang it badly, to which he replied "of course!  how else would one sing it" 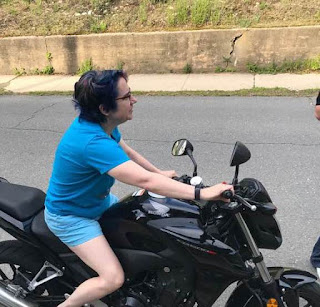 an appropriate photo for this story, i think.
and, no, i wasn't intending to ride,
just sitting on sons motorcy...cle


-this is no disrespect to mr. guthrie.  i adore his songs and his way of story telling.  i grew up listening to him, and he holds a tender spot in my heart and soul