the muse has awakened!

i'm going thru my canvasses like there is no tomorrow!  and it feels great!  doing backgrounds first is very freeing for me.  yesterday i saw my subject in the background and painted the background out in order to coax her out of the canvas.  today i looked at the background and while i didn't see the subject, i knew who wanted to reside in the nebulous looking colors; 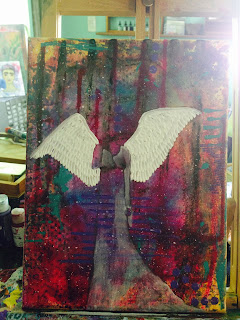 i had seen a tutorial for these wings by angela kennedy and decided to try my luck with painting them on the angel that wanted to climb the ladder that rested behind her.  i felt the texture would offset the busyness of the background, bringing the eye to the figure.

i went thru my sketchbook that holds all my daily nude sketches i've been working on and a pose struck me as perfect for her.   being very careful to avoid the still wet wings, i filled in the dress with a translucent layer of color, and used gesso to lighten where her hair would be.  she wanted a short, fierce cut. 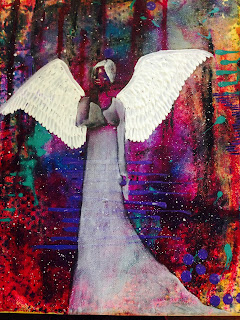 after waiting until her wings dried enough to dare go near her i started her skin, again scrubbing a dry brush as i wanted to see the stars thru her skin. 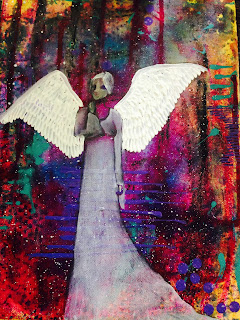 this angel had strong feelings about being real.  she wanted it known that she wanted to fly her freak flag.  after trying for a more traditional yellow/blond, like 'normal' angels have, she wanted red to be layered on top, with the lower blond part showing. 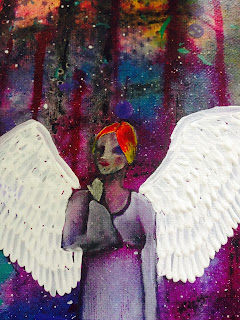 this is a smaller 8x10 inch canvas, so taking my time with each part of this was important.  my brush was tiny, the amount of paint was miniscule, and i blotted off mistakes immediately.  i'm confident that the amount of detail that i added leaves room for the brain to fill in for the parts i did not add.

i worked long and strong with this sweetheart, only coming back to earth when i felt pleased with where she was going in her story.  it was well past my lunch time and i had given myself a hunger headache, but i was content.

she waits for me in the studio, and i wonder if she will call on me to add anything further. 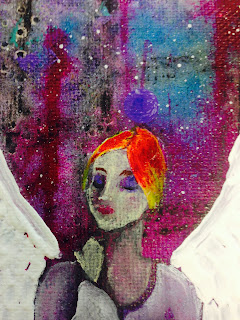 Email ThisBlogThis!Share to TwitterShare to FacebookShare to Pinterest
Labels: angel, canvas work, many paths to heaven