painting the background and subject of my raven painting

after a bit of recovery from my last round at the canvas, i was able to get back to it today.  fear was with me as i gathered my paints to start covering the bold abstracted underpainting to become closer to the final look.  i had begun to like the chaotic colors and bold shapes and worried it would all be lost to a more 'tame' painting.

i turned the canvas upside-down in order to paint in some of the bottom areas, so had to bend over to look at it in order to make sure all was going to plan.  i also took a few photos i could easily flip to see the progress.  i put on a thick coat of paint with a pallet knife at first, and later smoothed a light coat over top with a thick brush.  being such a large painting and the contrast between chaos and subdued, i couldnt see in my minds eye if it would ultimately look the way it looked in my head.  sweetie said he was confident i would be able to create what i envisioned. 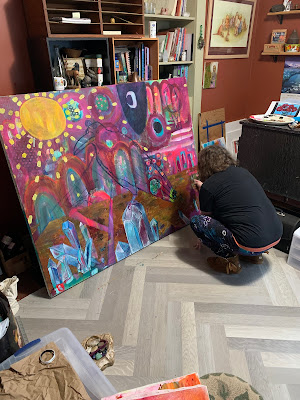 one highlight for me as i painted was the fact that the underpainting and texture was showing through in places just as i had hoped and planned for.

after the bottom third of the painting was finished i set to work on the top, being careful to go around the sun rays and other important areas i hoped would shine through.  i also sprayed parts down with water to let it drip here and there. 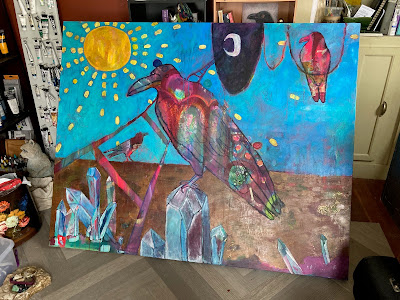 hint at whats to come; should have quit while i was ahead...

and then i got to the ravens.

let me tell you...  this was where i lost my love of painting.  period.  done.  (happens every time). i am at the 'ugly phase' and then some.  up close it's not too bad.  and then when i back up, the detail is lost.  i keep going lighter and lighter, and soon my raven will be lighter than the sky.  the reference photo i'm working with has the raven pretty much blue, but i have a blue sky.  so, if i go purple, a light purple, that might work.  i'm just so frustrated with painting right now.  and, painting 'stories' is difficult.  i like painting single subjects for a reason, i guess.  you can get up close and personal and there's not the problem with contrast with other subjects to deal with. 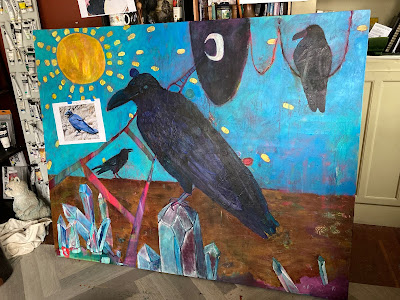 see?  you cant see the raven, it just is washed out, no detail.  up close there's detail.  i know there is, i painted it.  and, see the reference photo taped to the canvas?  that raven with the sun shining on it is blue.  blue wont work with my blue sky.

i'm just really discouraged about the whole thing.  the canvas is too big, i should have painted something bigger so you can see it all without moving your head.  this canvas in person is like watching a movie at a theater!    and i seriously hope this isnt going to be another one i have to gesso over.  sweetie keeps trying to talk me down and tells me to stop dwelling over it.  to let it rest and give it time.  i asked him, "so, i shouldnt burn it quite yet?".  he says no.

so, no bon fires tonight. i promise.

i'm gonna cuddle up with my pup tonight instead, maybe make a pillow fort, and tiptoe into the studio in the morning.  maybe some new eyes will make things feel better.

(and as i'm re-reading this post, i notice how big the change was that i made today.  maybe thats part of my problem with it.  i didnt give myself enough time to sit with a small change.  change is hard)