i've been tweaking my portrait the last few days, and am pretty happy with her.  i think she may actually be close to done! 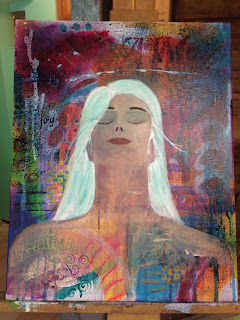 she really makes my heart sing when i stand next to her!  the layers are amazing.  i fixed her shoulders so they are less football player, made her neck thinner as well, and did several attempts at her eyebrows before getting to this point.

her hair is now a beautiful shade of teal which was a fantabulous accident that i squealed about when i saw how wonderful it was; 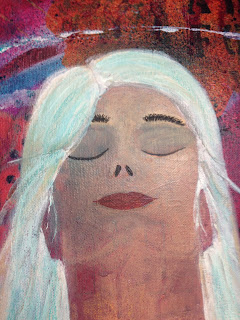 she will be called 'listen to spirit'.

and i played with an owl this morning.  i've been wanting to paint an owl, and today got another nudge by an artist i admire who did a mixed media owl with papers and paint.

i knew today was the day for owl when i read her post explaining some of the symbology of the critter.  they hold transition, wisdom and intuition with them and these are important symbols for me to attach myself to right now, as i go thru my own change and wish to be more intuitive with my art.

i had the perfect background of india inks i had saved from using stencils on another canvas.  i had just smeared the inks and let them dry and then added other colors in acrylics and sprayed more inks over it all until i was happy. 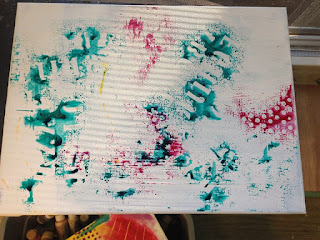 then i sketched my owl with charcoal and oil pastels.  i knew the turquoise by the bottom would be perfect for a branch; 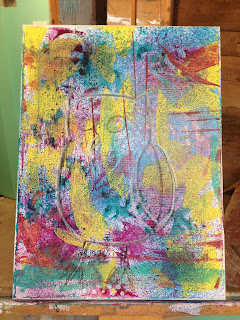 i sprayed some orange around the owl, and didn't like how it sprayed.  i think the sprayer may be gummed up.  so i used a paper towel to get the ink all over the background around the owl, trying to keep the owl more blue and yellow; 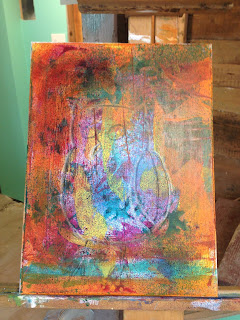 i really liked the contrast here, and wanted to create more, so i used a white wash of white acrylic with water and washed the owl to make the body more soft of a color overall.  i used the same whitewash with his legs and feet, and went around them with a brown to give them some shadowing. i used oil pastel for his owlie hood by his eyes, and painted in his eyes with yellow and blue, and a brown for his beak.  i also added another layer of turquoise for the branch and added brown around it for shadow; 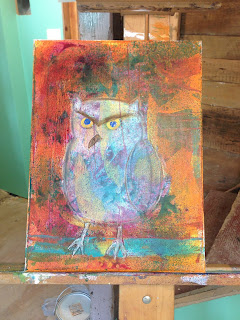 after waiting a bit i went back to work on him.  i added highlights to his eyes with white, and outlined them in brown.  i added more white wash to his body and outlined areas like wing and belly with a brown to highlight.  i shaded his whole body as well, outlining with the brown color.  i added some leaves and highlighted with a lighter green, and then sprayed the background with a burgundy india ink, trying to stay away from mr. owlie. 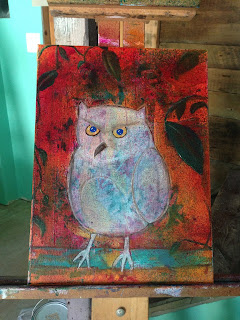 he may be done!