i've always dabbled in art, but never had confidence in myself or my abilities.  now, at age 47, i figure i'm coming into myself, finally.  i've *almost* got it figured out that my art is my truth, my voice, my story to tell.  i don't have to prove my o.k.-ness to anyone, because i'm already o.k.  my art is o.k.  it's an expression of me.  and it is growing as i grow. 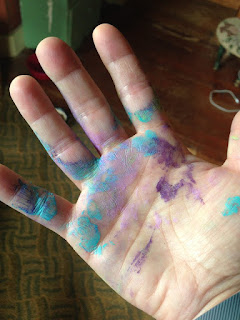 i've gone thru spurts of being very creative and then just stopped.  i've heard thats common.  or not.

all my 'craft stuff' was crammed in a small bedroom upstairs that was freezing cold in the winter and boiling hot in the summer, and i was busting it at the seams.  i had tons of paper stuff from finding images from magazines for my Soulcollage, i had totes of yarn, piles of fabric.  the room just didn't have the space or vibe i needed to let my creativity out. it became the catch-all because i only went in there to retrieve some item to play with.   those items then didn't get put back in the room so i could continue playing with it when i wanted to instead of hunting for it all over again.  so, my craft room quickly turned into the craft house with my stuff all over the place!

but now...  now i'm on my way!  my awesome hubby decided that since we were renovating the cellar to make the house less drafty, that the room down there will be dedicated to me and my 'stuff'.  i will now have a dedicated art studio instead of a craft room!  the main media i will have in my studio is for mixed media canvasses and journalling, as well as maybe some beadwork.  i have dabbled in other things, but my go to craft has always been with drawing and painting.  with it being mixed media though, anything goes, really!

i'm already using my studio, even though the floors are not in yet, my built in shelves are not done, and the multitude of trim and piddly stuff is not even close to being on our 'to do' list. 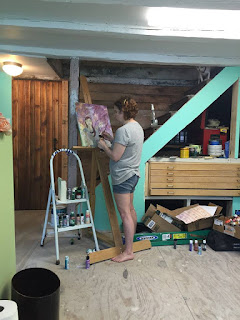 Email ThisBlogThis!Share to TwitterShare to FacebookShare to Pinterest
Labels: art studio, how i became an artist, life story, sweetie