well, my muse spoke with this canvas!  i had to blog twice in one day, because it came so clear what needed to happen with this one.  it blew me away.

this canvas was one i found for dirt cheap at the flea market, already painted, and only after i bought it did i notice it had a rip in it.  i was discouraged and it sat for a while.  it was taped on the other side so hadn't noticed at first.

today, after painting on it, layer after layer, the old tape wore off and exposed the bold gash.  again, i was discouraged.  especially after doing such a cool painting on it! 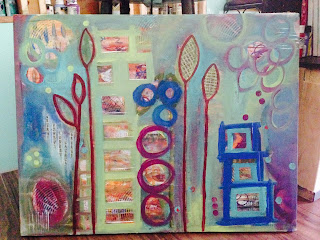 as i relaxed it dawned on me that the layers i painted, the boxes and circles showing all the depth, was like the canvas was cracking open, and the rip also was a cracking open of the canvas.

i knew i needed to paint myself as a bereaved mother, cracking open, ripped apart, but gaining so much depth, so much wisdom, so much faith in something MORE.

i saw where her/my head needed to go.   a purple circle was in the perfect spot and had the right feel for how i wanted the head to be.  not too realistic.

i was scared to mess up, but i trusted it would be the painting it needed to be.  the symbology was already there.  symbols of my three biological kids, of my six kids altogether, of my five kids left, our eight family members before winter died...  it was all there.

i let go, and she poured out of the crack, the rip, the crevice. 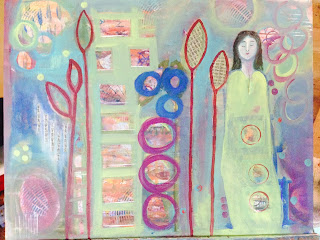 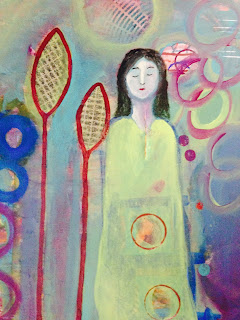 the rip is in her chest/throat area

i may leave the rip as it is, or i may adhere a piece of cloth or canvas behind it to make sure it doesn't become more damaged.  it isn't finished still.  some finishing touches need to happen before i am completely satisfied she is whole in her own healing way.

i will update on this blog post when she is totally finished.