"Crowning Herself", close to completion

She has Gone. Through. It. and this is her story of triumph!

Crowning Herself is a tribute to the struggles in life that beat her to her core.  she must decide to fight her way to the top, or lose the battle.  she has fought her demons for so long, and continues to on a daily basis, but knows the fight is worth it in the end.  she is weary as she dons her crown, but knows she is worthy of it, as well as her kingdom, at the end of her climb. 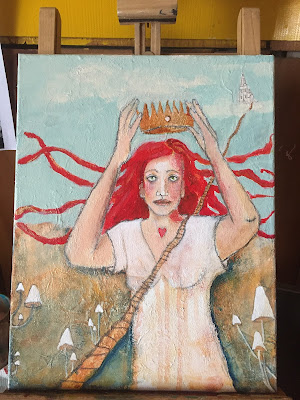 she let go of the darkness of her past.

The guilt, the shame, the sadness of it all.

She let it all go and,

entered her Kingdom of Light 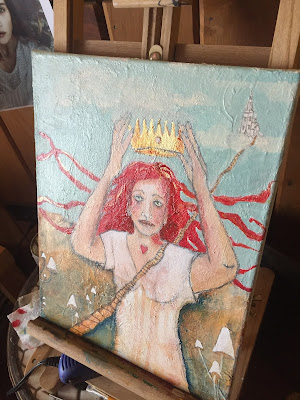 this painting has lots of gold! 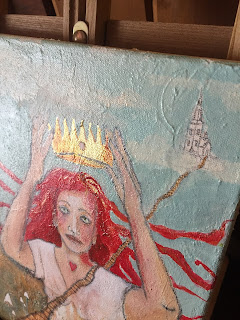 the coming together of my paintings always astounds me.  my muse is strong with her urgings, and the symbolism she tells me to include always rings true.  I try really hard to let each painting come naturally, to not force anything.  if the muse brings something up, I must respect that.  if I get an urge to paint in a specific color, I do it, though I might need to find a way to make it work (like the color of the ladder mixing with the hair... each needed to be seen, so I found a way).  the eyes being so emotive of pain would not have been my choice, but she wanted to speak of it, so I let it be.

this painting includes mushrooms, which I only found a few references to for symbolism, but they pertain to enlightenment, Kundalini and the Crown Chakra, which I found entertaining, to put it mildly, since the crown is the subject matter of this painting.  I then looked up the actual meaning of Kundalini (the site explains it wonderfully), as I know the term but I'm not knowledgable enough to explain it.  they also speak of snake symbolism with kundalini, and thats interesting because her hair is coiled and snake-like!  the website states "kundalini awakening offers a profound opportunity for those called to follow a spiritual path", and I have a stairway/path, leading to a castle.  it also speaks of an opening of heart, and I have an open heart by her throat chakra.

the only thing I added due to my research after the fact was the white stone in the crown to symbolize the Crown Chakra.  other than that, all the symbolism came to me from the muse as I sketched and worked on this painting.

she still has a few finishing touches to go, but I'm excited to see her up in my shops.  I will be posting to show you all the goodies as soon as that task is complete.

here she is, in all her glory and in my society6 shop as a framed print 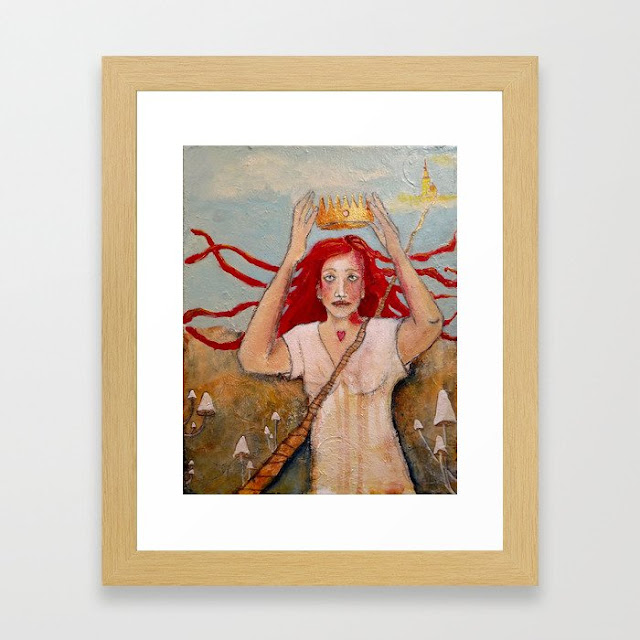