it's been over a year since working on this mama bear started in November of 2017, and I found it in me to continue and finish her over the weekend.  I blogged about her, but failed to update when I added to the sketch a few days later and from where she sat until Sunday. 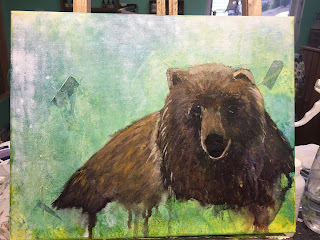 here's where she sat for over a year

it was a nice little painting, but her eyes got lost, and she didn't say all she needed to say.  I felt bad about leaving her all that time, but I'm happier now that I put more work into her.

her tale started as a dream.  in it, my son, Winter-Orion, waded thru the river (where he drown in my reality in 1998, though in the dream it was a small stream) to the other side, where he met up with a mama bear who walked with him over a bridge back to me.  I found the dream healing and soothing, especially after reading a bit about the symbolism of the bear and how it fit into my dream.

yesterday I worked on her, trying to hint at that story a little bit.  I worked on her eyes until they could be distinguished from her fur in her face and worked on the back fur a bit more.  I also decided to bring in some gold chevron pointing up to symbolize the communication with spirit world in my dream, and more gold to highlight some of the fur. 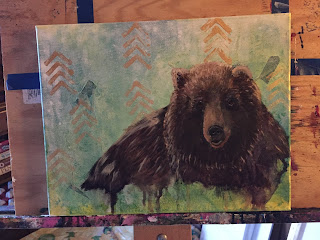 I then decided to darken the background a bit with my signature drippy goodness in shades of green and turquoise.  I knew that the paint would be repelled by the gold, and wasn't disappointed by the effect. 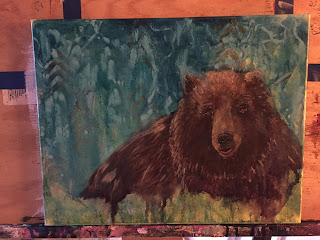 I felt that the painting was too dark, and the bear was lost in the darkness.  today I worked to rectify that by bringing out the gold chevrons again then mixing some lighter greens and blues and dabbing my brush around her, kind of in a leafy halo effect, and then turning the canvas upside down and letting some green gold drip to represent trees. 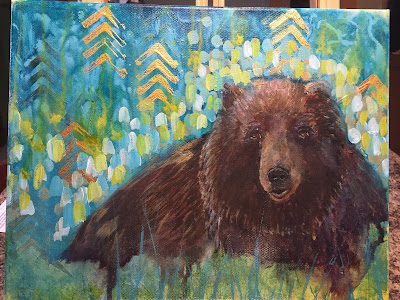 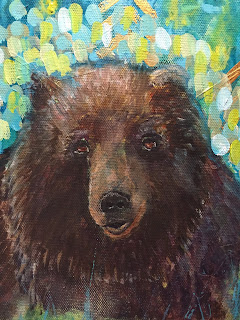 her eyes pop only after struggling with the colors 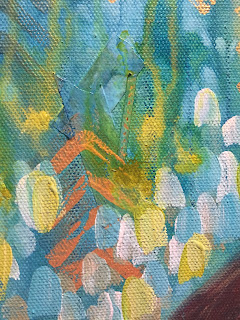 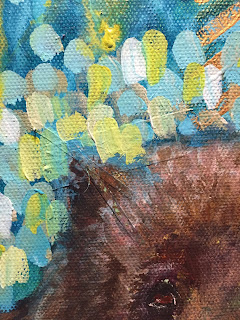 texture and drips are my obsession! 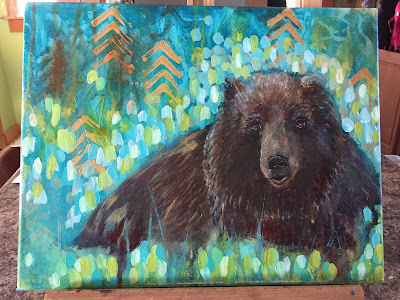 needed leafy texture at the bottom for balance

she will be added to the store at some point this week.